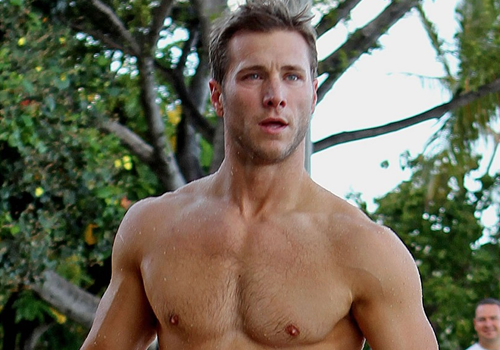 Jake Pavelka was one of the most popular Bachelors of all time. Women went crazy for the 38-year-old Dallas pilot back in 2010.

But ironically the handsome stud may have not actually wanted a female! Yes, I actually entertained the thought that Jake may be gay when I learned that he was not all that interested in sleeping with his fiancee 30-year-old Vienna Girardi. In fact the two stopped being intimate for months before breaking up.

Granted Jake is pretty traditional and I thought it was perhaps Catholic guilt, but alas the evidence is compelling that Jake was actually gay.

1: His reluctance to have sex with Vienna.

2: His reluctance to have sex with ex-girlfriend Tanya Douglas whom he dated from 2008 to 2009.

Tanya told Star magazine, “He told me that he had to abstain from sex for religious purposes until we were married, which is exactly what he told Vienna. It was so weird, because we had already been intimate! It’s bizarre to change overnight like that.”

In fact Tanya said, “I always wondered if he could be (gay)”. “There were a lot of signs. … Jake would get really giddy [with one particular male friend] and the two of them were very touchy-feely.”

And then the kicker:

3: Tanya claims that Jake once told his mom he needed to see a psychiatrist because he was “confused.” 4: Jake was spotted with Bachelor Pad contestant Juan Barbieri at West Hollywood gay club Micky’s in 2009 acting like a couple!

The two both starred on Jillian Harris season of The Bachelorette so perhaps the sparks were flying back then!

Juan is a contractor on HGTV now.

5: His rejection of Erica Rose.

On Bachelor in Paradise in 2011 contestant Erica Rose relentlessly pursued Jake–literally just looking for sex and Jake turned her down…what guy would do that?

In fact despite being surrounded by gorgeous women that season Jake didn’t seem remotely interested in any of them. I have to admit I found the two to be an odd pair at the time and considered that Kristen may have been a beard or actually Jake may have been her beard. Although Kristen has dated a lot of men in Hollywood, she has been very vocal supporting gay causes.

7: Jake is still single and hasn’t been linked to anyone since 2012.

I entertain a lot of gay conspiracies, but I think this one has the highest chance of actually being true. Either we get to see Jake come to the rescue ‘on the wings of love’ and advise Bachelorette Jojo Fletcher in a few weeks on who she should choose. He is friends with her brother Ben Patton.

And either way, we LOVE Jake!!!