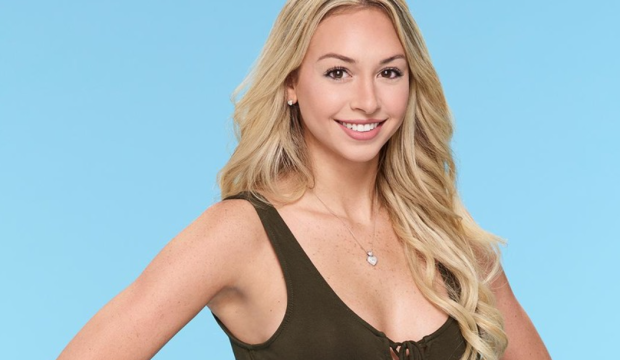 Last night we enjoyed the premiere of the 2017 season of The Bachelor and it was clear that the role of villain would be played by aspiring actress/model Corinne Olympios.

Corinne is seen at the beginning in her intro at her home in Fort Lauderdale, Florida with her mom, her dad and her nanny Raquel. Yes, Corinne tells cameras that she has a nanny and she lives at home. That alone would make her an epic character, but there is so much more.

So what do we know about Corinne thus far? 1: She has a little sister Taylor Olympios. Yes Corinne is not the only child of James Olympios and Peri Miriam Olympios. Her mom is in her 50s and dad is 60, both from New Jersey. They are, not surprisingly, Greek 2: She’s very wealthy…at least her family is wealthy. Her dad’s ”multi-million dollar business” is Miami-based Armor Garage — a supplier of epoxy floor coatings. The company boasts annual revenues of $3 million dollars a year. In her intro Corinne says she runs the business, but in reality it looks like she is in sales.

3: She’s Jewish. Yep, despite being very salacious, she is apparently quite spiritual and devout to Israel. 4: She he has worked on a number of music videos, including videos for Pitbull, Lil Jon, and Akon. She has also appeared on a television pilot–a pilot called Unorthodox Approach. To be honest, I am wondering if ABC did not pay her to join the show and be a situation.

5: She does have some college under her belt, but it doesn’t look like she has a degree. She went to Florida International University. 6: She is very proud of her ample breasts. During a group date, she takes her top off and puts Nick’s hands on her D cup breasts. Although on the season Corinne claims she needs a “tiny boob job”—I’m not sure what that means. Needless-to-say the impulsive move infuriates Nick’s other suitors.

7: She literally stole the first kiss from Nick. On the premiere Nick was connecting with Vanessa Grimaldi when Corinne swept in and just started making out with Nick. Corinne is ready to get the party started! Previews show her sneaking in to Nick’s hotel room for some ‘off-camera time’ and you hear heavy breathing and Nick saying ‘I don’t think this is a good idea’. She is also bragging about her “platinum vagine”. Yep Corinne may even beat Courtney Robertson in the comes on a little strong department. Stay tuned for more on this epic situation!