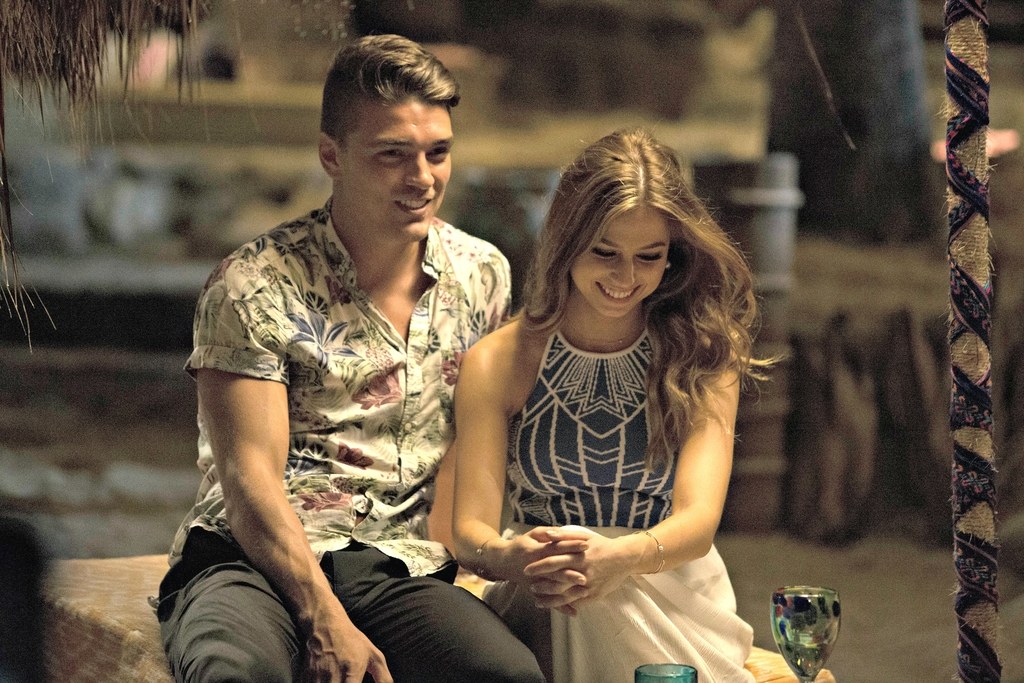 Tonight on episode 3 of Bachelor in Paradise things seem to simmer down a bit. The cast has sobered up since the 2 drink max was instituted and even though on-screen it looks like just a day or 2 has passed, in reality the contestants have been home for a week and a half.

This is important because it meant cell phones were returned and texting could take place between couples off-camera before contestants returned to paradise to resume their relationships.

Tonight we noticed that Dean Unglert’s feelings for Kristina Schulman have significantly subsided while Kristina’s feelings for Dean have decidedly escalated. The classic BiP dilemma. So what happened?

Cut to two episodes later and Dean has gone from genuine emotionally available gent looking for lasting love to 26-year-old player looking to get laid–especially when Danielle Lo arrived.

Fans quickly turned on Dean, who thus far had been the fan fave.

I think the answer to the question of what happened lies in an interview that Dean recently did with Glamour magazine.

Unglert, understandably is dreading seeing his stint on BiP air.

“It was one of the greatest experiences of my life,” ….”I’m looking forward to [seeing it air], but also dreading it…just the emotion of it all. I almost think Paradise might have been more stressful than The Bachelorette to be perfectly honest.”

“I’ve cried so much more in the last three months filming The Bachelorette and Bachelor in Paradise than I have over the last 10 years, and here I am thinking I’m weak because of it, but ultimately I think people respond to it positively. It’s an interesting dynamic.”

And here is where it gets good.

Glamour asked: “Your first date in Paradise is with Kristina Schulman from Nick’s season, but then everyone was sent home because of the investigation. Do you think that affected how things turned out in the end relationship-wise for you?”

“Yeah, I think it affected everyone. When you’re in that environment, whether it’s Paradise or The Bachelorette, they take away your phone for a reason—so you can focus on the topic at hand and not be distracted by any outside influences.”

“We were filming for three days, we were in Mexico for 10 days, and then had a week and a half hiatus where the entire original cast was able to text each other on a daily basis and see what life would be like with each other, or friendship-wise even outside of Paradise.”

“It was definitely a unique perspective, and I’m not sure if it changed things for the better or worse, but it definitely changed things pretty significantly. So it’s going to be weird because you’re going to see these people in Paradise that have known each other for three days, and then in the next episode we will have known each other for three weeks. You go from acquaintances to being friends over the course of one episode just because of that break.”

So I think this is the key to the turn. I suspect that when Dean and Kristina left paradise, they continued texting. Kristina probably came on a bit strong and wanted a commitment from Dean or at least was acting like they were in a committed relationship.

Dean says this about what it was like for that brief time in the ‘real world’.

“It was refreshing in the sense that you have a real taste of what a relationship could be like outside of Paradise, and a lot of times you tend to romanticize things because again you’re giving your undivided attention to this person, and realistically you can’t do that in the real world.”

So there it is. Dean likely wasn’t giving Kristina enough attention in the real world and things quickly spiraled downward fast. Dean suddenly realized that he needed an exit strategy.

Another noteworthy detail is that Kristina had been dating Bachelor alumni Jef Holm just prior to going on BiP. This suggests that Schulman is currently living in Los Angeles, which is where Dean presently lives.

In other words, I am suggesting the two spent serious one on one time together off camera during the one week hiatus and that may have changed everything.

But then check this out. When asked if he found love Dean said this,

So is he referring to Kristina or Danielle Lo?

As to whether he is still in love,

“That’s the kicker! That’s the million-dollar question. I guess we’ll have to tune in to find out. That’s what the live reunion is for!”

Bachelor in Paradise airs Mondays and Tuesdays at 8 p.m. ET/PT on ABC.

4 thoughts on “What happened to mar Dean Unglert’s feelings for Kristina Schulman?”