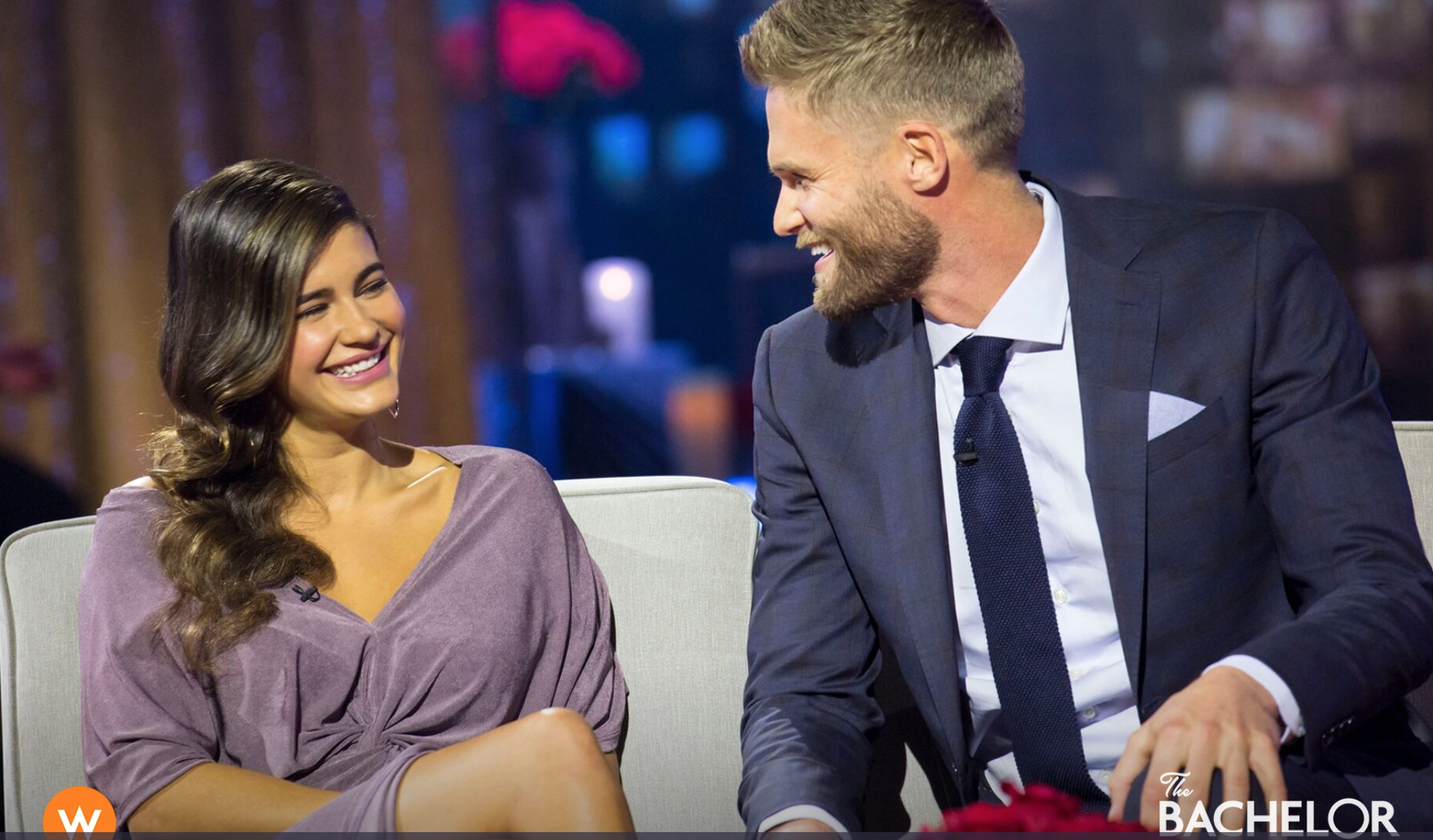 The Season 3 Bachelor Canada finale aired tonight and 33-year-old Chris Leroux sadly bailed on his contractual obligation to propose to one amazing lady.

Yes, Chris opted to forgo the engagement proposal and stay as a single individual despite W Network’s best efforts to find him a life partner.

He did ‘choose’ 27 year-old Communications Manager and Fashion blogger Mikaela Wightman, BUT only in a ‘hey let’s continue to hang after this’ kind of way.

Personally, I did not see any way that Leroux could choose either one. He certainly had chemistry with Lyndsey Gavin but she is 23 for the love of God!!! And I knew that Chris could not possibly overlook that one creepy detail despite the “x-factor”.

And the chemistry with sweet Mikaela was just not there.

Part 1 of the Finale

Last week Chris admitted to having more affection for Lyndsey and having doubts about his feelings for the more age appropriate Mikaela.

“Cold Feet Chris” (as he has aptly dubbed himself) confesses to M that he is having doubts during their romantic Sunwing pirate ship date. But the very patient Mikaela is ready to get to the bottom of things at dinner and gives Chris a chance to work through his feelings–or lack there-of. He starts to open up just prior to taking Mikaela to the Fantasy Suite for their sexy time–which has got to be sooooo awkward!

But oddly as they arrive to their Fantasy Suite, Chris tells Mikaela he is falling in love with her (hmmmm, I suspect he had some producers pumping him up off camera—lots of mix tapes, lots of lemon wedges).

Mikaela then reads Chris the contractually obligated love letter she has written him during her hotel lock-down time — suggesting they may, in fact, be more than friends.

Next up Lyndsey. Lyndsey gets the mud bath date prior to her Fantasy Suite ensuring that her and Chris will be perfectly exfoliated before their sexy time.

Now here’s the situation: I think Chris is in love with Lyndsey and I think he is terrified by the age difference compounded by Lyndsey’s family’s concerns. After all he did ask Lyndsey’s father for permission to marry her—something he did not do with Mikaela.

The two discuss the sitch during a creepy purification ceremony, which has me concerned that producers are preparing Lyndsey for some sort of virgin sacrifice–or she is preparing herself.

Anyhow, ultimately despite the awkwardness and despite the promise that Lyndsey made to her sisters not to go to the Fantasy Suites she accepts the proposal.

The next day the final 2 ladies meet Chris’ adorable and happily married parents, Marian and Keith, who fly down to Mexico to weigh in.

Naturally the family prefers the more age appropriate Mikaela to the barely legal Lyndsey and they delicately communicate that to their confused son. I suspect that prior to that he was planning to pick Lyndsey and told Lyndsey as much off camera. But the sage words of mom and dad make him realize Lyndsey is a bad bet.

Mom gives Chris some very heartfelt advice–telling him that it’s important for him to be vulnerable not afraid to fall in love–aka PLEASE give Mikaela a shot. Chris cries. And I think this convo is what sealed the deal for M over L.

Part 2 of the Finale

Chris and Lyndsey ride bikes and cuddle on the beach in Tulum, Mexico.

Cold Feet Chris tells the girl he is falling in love with that he is not willing to move to Vancouver, and wants to stay close to his parents in Mississauga which is just outside Toronto. “I’ve been away from my parents for so long; I just feel like I need to spend more time close to my family”.

Lyndsey still thinks Chris could change his mind. And apparently Lyndsey isn’t truly head over heels for Chris because she hasn’t even considered relocating to be with him!

Mikaela is lamenting that Chris took her to meet his parents the same day he woke up with Lyndsey after their Fantasy Suite date–certainly not an ideal situation.

“I was so excited, so happy about being together at the end of this. Now, I don’t know, I feel confused about everything,” Mikaela says to him.

“I meant everything I’ve said to you in the fantasy suite. It was all real,” Chris tells her. “The other day and night was one of the best days and nights of my life. I’ve probably never been happier than the morning after with you.”

But Mikaela loses confidence in Chris’ reassurances after Chris refers to her as Lyndsey!

Chris told her his parents said, “Lyndsey’s one of the loveliest women she ever met. I mean, f—, Mikaela.”

“Oh my god, that is the worst thing that ever happened in my entire life!” Mikaela declares.

Chris tells cameras that despite all of his doubts, he has found his “soul mate.”

The first barefoot landing gear to touch down on the picturesque Caleta Tankah beach is Lyndsey’s which means tears and an exit limo for Lyndsey, but wait, instead, she tells Chris,

“You’re phenomenal and you’re great, but there are so many things that don’t work with us. You are not my person. What I wish for you is that you are so happy and that you find a love that is so great, but I know I’m not that person for you either.” Chris breathes a huge sigh of relief and replies:

“I came here today to tell you how strong my feelings are for you and how amazing you are, but there’s just too many challenges with us and I think that if we met in a different time we would be perfect for each other, but I don’t think this is that time.”

Lyndsey walks away with a few tears and no hugs–not even a high five.

Then Plan B arrives: Mikaela. The two immediately hug and hold hands. You can tell Chris is so anxious to get this over with and get off camera!

He apologizes for getting her name wrong.

“I apologize for yesterday,” …..“but you amaze me, you’ve always amazed me. I think that if we give this a chance in the real world we’ll have the best relationship ever. And I do love you. I’ve known that for a while…(even though I can’t remember your name)”. Mikaela replies, “I don’t for one second want to give up on you. I love you and I want to do what it takes to make it work.”

Chris then has to explain why he is not getting down on one knee and breaking out the engagement ring in his pocket, “although I can’t envision my life without you I want to be engaged to you when we think it’s right.”

So in the end he pulls a Chris Soules and chooses the more sensible girl over the one he really wants. Although to be fair to Chris Lyndsey did dump him before he had the chance to dump her.

Chris chooses Mikaela, but his failure to commit had fans reeling!! There was no grand declaration of love–no Michael Hill engagement ring–just the proposition to continue dating.

Like I said, I think Chris is in love with Lyndsey and kept Mikaela around because he thought of her as great friend material and thought she would be mature enough to handle a breakup. (Of course, the other possibility is that Chris, like Bachelor Jake Pavelka, is just gay).

I think there is a lot going on behind the scenes with producers scrambling to get a happy ending aka an engagement and they convinced Chris to give things a try with Mikaela at the last minute. Thus, he ‘sort of’ picks her in the end in the most lukewarm final rose ceremony in Bachelor Canada history.

As to the big question: Are Chris Leroux and Mikaela Wightman still together?

We learned on ATFR that the couple had already broken up before their finale even aired! OUCH!

And don’t hold your breath for Lyndsey and Chris either. They aren’t even friends after all this. Lyndsey couldn’t even muster a hug for Leroux on After the Final Rose.

I suspect she has a lot of living to do — including going girl for a while as it appears she already has from her social media!

That girl is on a ‘journey’. And every good journey includes a dip in the lady pond.

Although, don’t count out the possibility that Lyndsey could still be the Bachelorette.

On the very awkward ATFR episode Chris tells her ‘I feel like I’m allowed to change gears’ to which Lyndsey shoots back ‘yeah, you are…and so am I’.