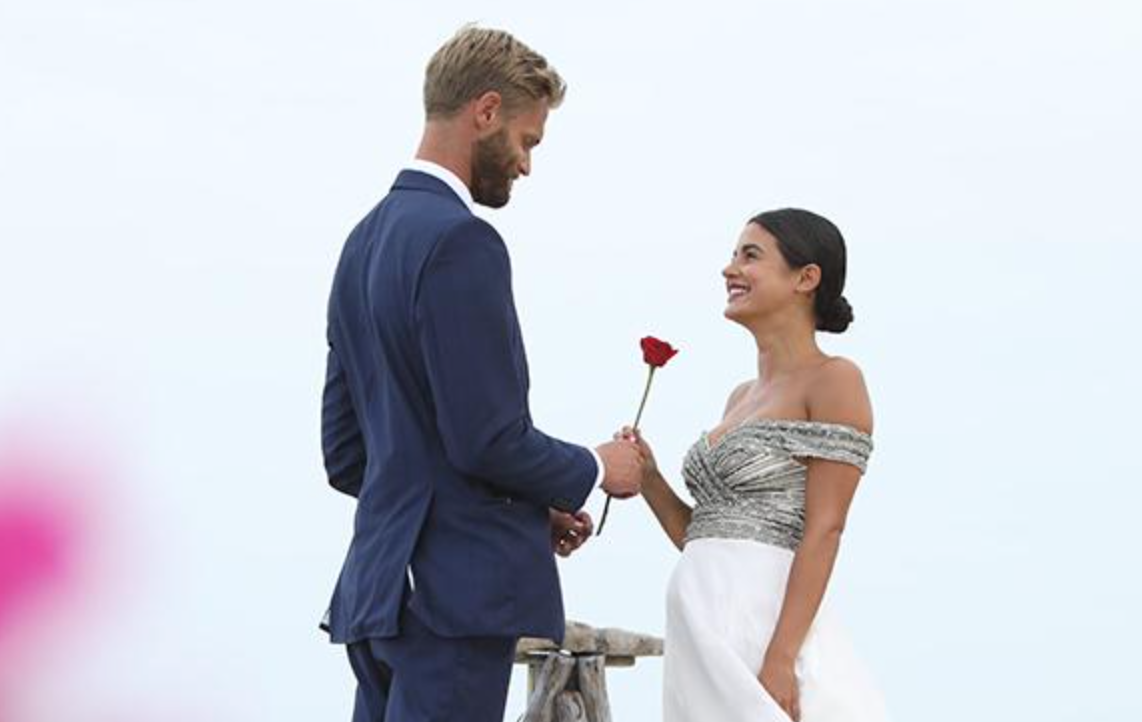 If you saw last night’s less than dramatic Bachelor Canada finale then you already know the answer. Yes, in the end 33-year-old Chris Leroux offered a lukewarm proposal of continued dating to 27 year-old Winnipeg, Manitoba Communications Manager and Fashion blogger Mikaela Wightman, but the two had already broken up before the finale even aired!

I suppose it didn’t bode well that Chris got Mik’s name wrong when telling her what his parents said about her. OUCH!

Anyhoo, on After the Final Rose we got the official word that the couple is no longer dating and just remain friends.

After a very uncomfortable confrontation with runner-up Lyndsey Gavin, host Noah Cappe teases that Chris and Mikaela have a big “announcement” and “very big news” leading fans to believe that they actually fell in love off camera and finally got engaged and will be announcing their televised wedding date.

Mikaela comes out and hugs Chris. The two sit next to each other awkwardly on the love seat as Noah roles footage of their amazing journey.

“How are things with the two of you?” asks Noah.

“Is Mikaela still in my life? Yes. But are we romantic with each other? No,” Chris explains.

“I just wasn’t ready to give my heart to somebody fully. I don’t want to do that until I’m ready.” Of course that would have been a good thing to tell producers before accepting the gig to be THE BACHELOR, but I digress.

Mikaela also tells Noah that watching Chris ask Lyndsey’s father for permission to propose was hurtful–especially given that he did not ask permission from hers’!

Chris replied that he wasn’t certain that he wanted to propose to Lyndsey but just wanted to run it past her father, which must have made Lyndsey’s parents happy to hear. Of course Chris is just trying to save face and explain why he made a last minute switch-a-roo.

Mikaela says Chris couldn’t give her “what (she) needed at this time.”….like a boyfriend for one.

“I do feel like a better person for going through this experience,” she proclaimed. “It didn’t work out for us at the end, but that doesn’t mean everything else in between wasn’t really special.”

Well, there you have it. Fans got to watch Chris and Mikaela on a journey to become better people. Sigh…