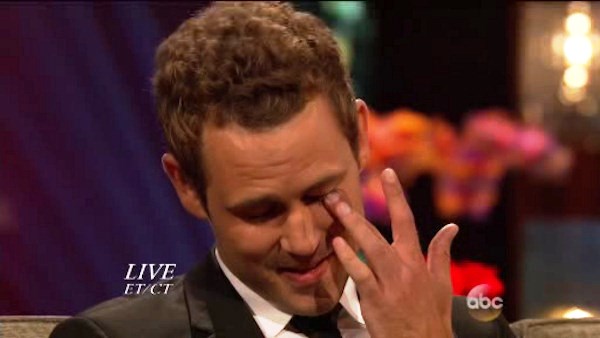 Wow! This is a situation for sure….for many reasons.

We just learned that Bachelor Ben Higgins was seriously torn in the end between his final two women when he had to hand out his final rose – “still uncertain” even while choosing the Neil Lane engagement ring.

Producers have been hinting that Ben may even pull a Mesnick on us.

But it may be too late to pull a Mesnick because it sounds like Ben’s runner up is now taken!!

Yep, taken by none other than Bachelorette villain 35-year-old Nick Viall.

According to In Touch,

“They started seeing each other a couple weeks ago.”

“They live in different states so they’ve been meeting up in LA,” says the source.

“Ben probably won’t be surprised when he finds out,” ….“It’s typical Nick behavior.”

Nick was dumped by Bachelorette Andi Dorfman, 28, and Kaitlyn Bristowe, 30 and is famous for his shameless approach to pursuing women. He caused quite a stir on Kaitlyn’s season when he crashed the show on the 4th episode. And when he was caught on a hot-mic having “off camera” time with Kaitlyn in Ireland.

The runner up is 24-year-old Dallas real estate developer Jojo Fletcher and Jojo has a history of dating much older men. Her last boyfriend, Chad Rookstool was 38 years old.

Unfortunately this would mean that Jojo would not be available to be The Bachelorette!

UPDATE 3/15/2016: Jojo Fletcher WILL BE THE 2016 BACHELORETTE!! This is great news for Jojo because it means contractually she can no longer date Nick Viall. Hahaha!

All kidding aside we look forward to watching Jojo embark on a 9-week journey to find love in May.

UPDATE 3/24/2016: Ex boyfriend Chad Rookstool says he and Jojo got back together right after she returned home from The Bachelor.