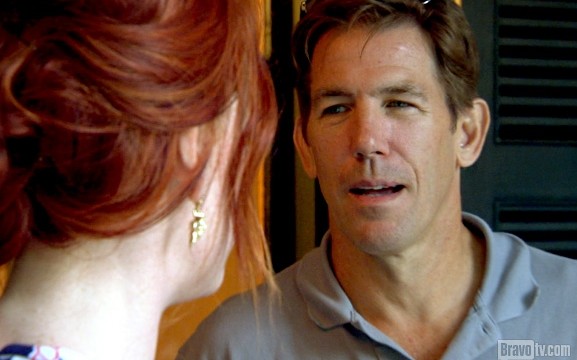 So after last nights shocking ending of Southern Charm fans are scrambling to figure out if Thomas Ravenel and Kathryn Dennis are still together? And if so are they just dating or are they engaged?

Interestingly on the finale Kathryn claims that Thomas promised her that if she got pregnant, he would propose to her right away.

Kathryn says: “if I get pregnant, we said we will get married right away.”

Whelp! She definitely did get pregnant! But she did not get a ring–not yet at least.

Thomas Ravenel has still not proposed to baby mama Kathryn. In fact, Ravenel now claims that he has no current plans to propose to Kathryn. (let’s hope he gets a pre-nup if he does). Although they are still together.

Ravenel was married in 1995 to Mary Ryan Ravenel, but separated by 1996. He was engaged again to Candace Yearwood, 30 in 2001, but dumped his then-bride by phone (ouch!), the day before the wedding.

Thomas Ravenel was engaged to Danielle Tosi in 2011

Kathryn allegedly hooked up with three of the men on Southern Charm, including Whitney.

Well they may not be engaged but they are still together. And they have shared some adorable photos of their new baby girl, Kensington Calhoun, born on March 24.

Update: The two officially broke up in October of 2014 amid assault allegations made to the Charleston Police Department by Dennis’ Lauren Moser. Who is his baby’s mama Kathryn Dennis?

Who is Thomas Ravenel?